WE TRANSFORM BUSINESS NEEDS INTO SOLUTIONS THAT GROW WITH YOUR BUSINESS.

The Bancorp has decades of multi-industry banking experience and a technological focus to help our clients achieve sustainable business growth.

Our partners benefit from our financial strength and industry expertise.

Through strategic alliances with nonbank wealth management platforms, we enable independent and registered financial professionals to expand their service offering to better compete with larger and more fully-resourced institutions.

A one-of-a-kind offering to serve you better

The Bancorp Commercial Lending business offers a distinctive set of services which reflect our commitment to meeting your evolving business needs.

Whether you need a small business loan or leasing services for a fleet of vehicles, we can provide you the expertise and financial traction to keep you on the road to success.

As a direct lender, we provide a streamlined, single source of origination, funding, and asset management for loan brokers and their clients seeking to purchase and reposition multifamily and other commercial real estate properties.

WE TAILOR BANKING SOLUTIONS TO YOUR BUSINESS NEEDS.

Across our Fintech Solutions, Institutional Banking and Commercial Lending business lines, The Bancorp offers a wide range of products and services that can transform your business needs into long-term, technology-enabled solutions.

Tap into the mindset of The Bancorp solution leaders as they discuss what’s new in the banking industry and how The Bancorp can help you stay ahead of the curve.

EXPERT COMMENTARY AT YOUR FINGERTIPS

THE BANCORP OFFERS A VISIONARY APPROACH TO BANKING BACKED BY DECADES OF INDUSTRY EXPERTISE.

The Bancorp solution leaders are financial industry experts conversant with the latest banking trends and the next generation of business banking solutions.

THE BANCORP DESIGNS THE FUTURE OF BANKING ONE CLIENT AT A TIME.

We’re not a startup, but we think that way. The Bancorp approaches each client’s needs as an opportunity to develop the next generation of banking products and services.

THE BANCORP LEADERSHIP FOSTERS AN INVENTIVE APPROACH TOWARD BANKING.

NAVIGATE A
REWARDING CAREER
AT THE BANCORP

WE’RE INVESTED IN YOUR DEVELOPMENT AND GROWTH.

The Bancorp offers a dynamic work environment and ongoing opportunities to broaden your knowledge and enrich your skill sets.

THE BANCORP VALUES THE DIFFERENCES THAT MAKE US UNIQUE.

We cultivate an environment where all cultures, ideas and perspectives are equally acknowledged and respected.

The Future Trajectory of the Electrification of American Vehicles

Over the past decade, there has been a global call on drivers, auto manufacturers, and companies at large to reduce their carbon footprint. Since taking office, President Biden has made that call even louder with proclaimed plans to electrify America. 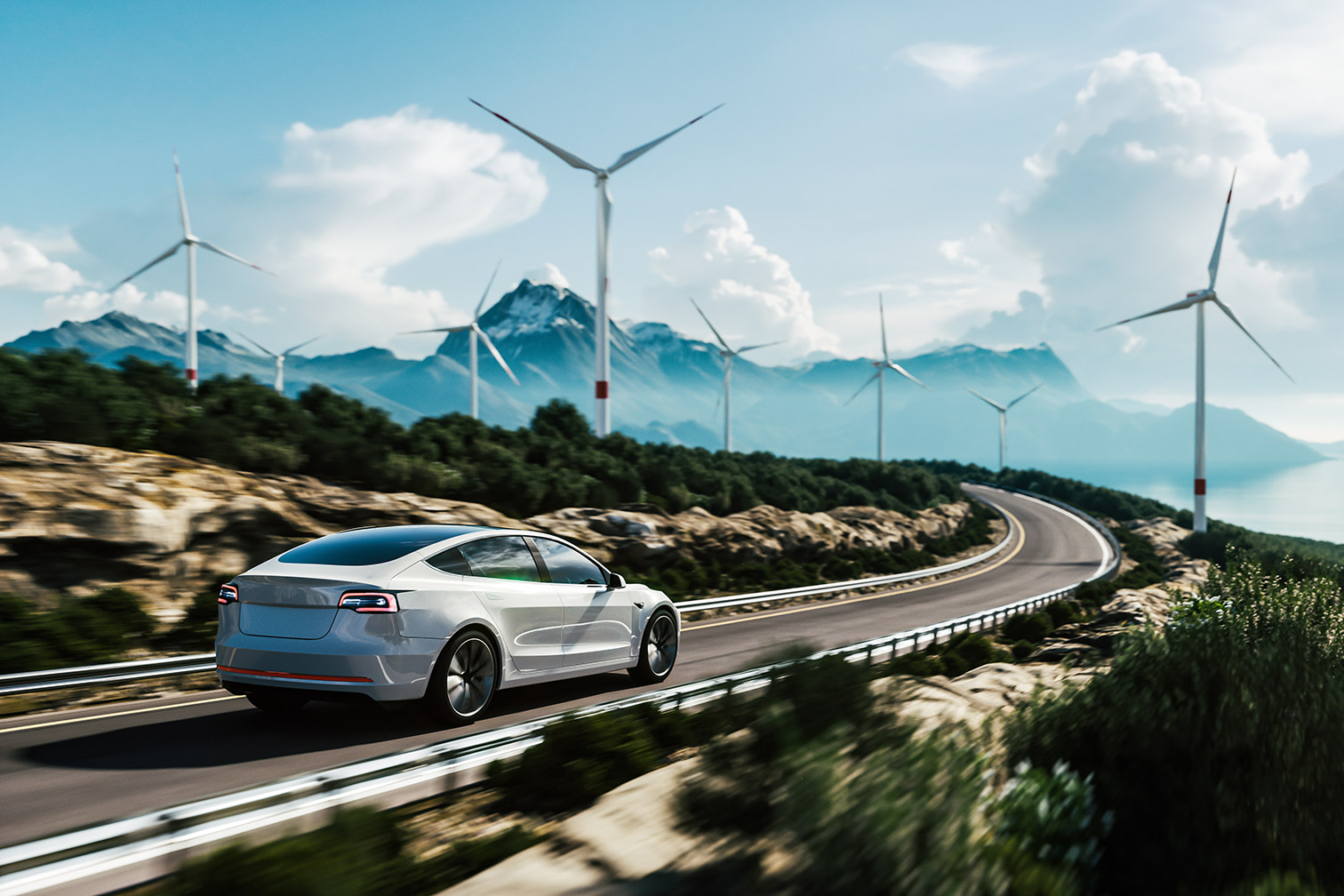 In response, many auto manufacturers are proactively making investments and changes to their vehicle lineup to shift toward an all-electric future — both in the consumer retail and fleet spaces. But as manufacturers increase their electric product offerings, the existing infrastructure that supports gas-powered vehicles will also need to change in order to accommodate electric vehicles (EVs) on such a large scale.

The electrification of American vehicles will not be an overnight phenomenon, but rather an ongoing process.

Considering all of the infrastructure updates needed to support vehicle electrification nationwide, this process could take at least a decade, likely two or more. Despite the widespread belief that this transformation is rapidly approaching, the number of EVs on U.S. roads today and anticipated in the next few years is still small in comparison to their gas-powered counterparts. U.S. EVs are projected to reach 18.7 million on the road in 2030, up from one million at the end of 2018.¹ To put this into perspective, this equates to just about 7% of the 259 million vehicles (cars and light trucks) expected to be on U.S. roads in 2030.² When compared to the fact that pure electric vehicle sales currently make up approximately 2.5% of total global sales, and 1% domestically³, it is evident this will be a slow, lengthy process.

The most notable change that needs to be made is technology. Existing technology and the current speed of vehicle charging is a big hurdle for the industry as it currently stands, even with the limited number of EVs on the roads today. The country will need much faster charging technology and many more charging stations that are compatible across all automakers’ EVs, but the financial investment this new infrastructure will require is still unclear and difficult to predict.

Gas stations to undergo changes in the coming months and years.

In addition to impacting technology infrastructure, the electrification of America would have a massive impact on small businesses such as quick-stop oil-change shops and local independent repair facilities. There is considerably less maintenance work to be done on an electric vehicle; for example, EVs don’t require oil changes or transmission repairs. With the potential for more customers to utilize charging stations, gas stations of all sizes will see less revenue from traditional gasoline overall.

Interestingly, although gas stations would need to upgrade their infrastructure to support an influx in the number of charging stations, they won’t be the driver of those upgrades; the gas providers (such as Exxon, Chevron, etc.) will, and it will be slow to start. However, once that infrastructure is implemented, gas stations will be competing with at-home charging stations, which ultimately limits the number of trips drivers take to the gas station.

There are also considerations specific to hydrogen-powered vehicles that need to be kept top of mind. If gas stations invest the time, energy, and money to accommodate charging stations in addition to fuel, and hydrogen-powered vehicles become the norm, there is the potential for these revamped gas stations to either add the ability to store and dispense hydrogen fuel or eventually become obsolete.

Given that there are still so many unknown factors as the industry pushes to innovate and reduce its carbon footprint, gas stations will likely hold off on implementing any long-term upgrades until there is significantly more clarity.

What gas stations can do to grow in the meantime.

There are a number of upgrades gas stations can implement in the short-term to continue growing their business, regardless of the trajectory of nationwide electrification. The pandemic highlighted the sustained demand of the industry, as gas stations haven’t been as negatively impacted as other industries.

By expanding to provide more ancillary services such as convenience stores, quick-stop restaurants, car washes, touchless payment systems, and other options for drivers, gas stations have a range of options to fuel growth of their business and their revenue.

While it may be too soon to tell if these ancillary services will support a potential shift to electric charging stations in the future, they can become continuous, reliable sources of revenue — regardless of the anticipated slow adoption of EV charging on-site.

Questions for Lawn Care Businesses That Want To Be Acquired

Many lawn care businesses are juggling a combination of consistent, increasing demand for services and an aging/shrinking workforce. For these business leaders, it’s vital to examine the business within the context of the following questions as they begin to plan for the future and determine if acquisition is the best course of action.

The Chip Shortage: One Year Later

As we near a full year since this issue began, The Bancorp takes a look at one of the hardest hit industries — construction — and forecasts what business owners may be able to expect as the shortage continues, as well as how to navigate the situation until it is a thing of the past.

There is no question that small business owners have been through a tumultuous time over the past few years. Through the hardships brought on by the pandemic and its ongoing economic and social impact, business owners have dealt with unparalleled pressure to remain resilient and determined to sustain and grow their companies.

There are more than 70 million baby boomers in the United States who are at or near retirement age, and about 70% are expected to enter some type of assisted living facility (ALF) in the future. This, coupled with the fact that Americans are living longer, has prompted many older Americans to turn to ALFs to serve their needs, which has generally driven remarkable growth in the industry.